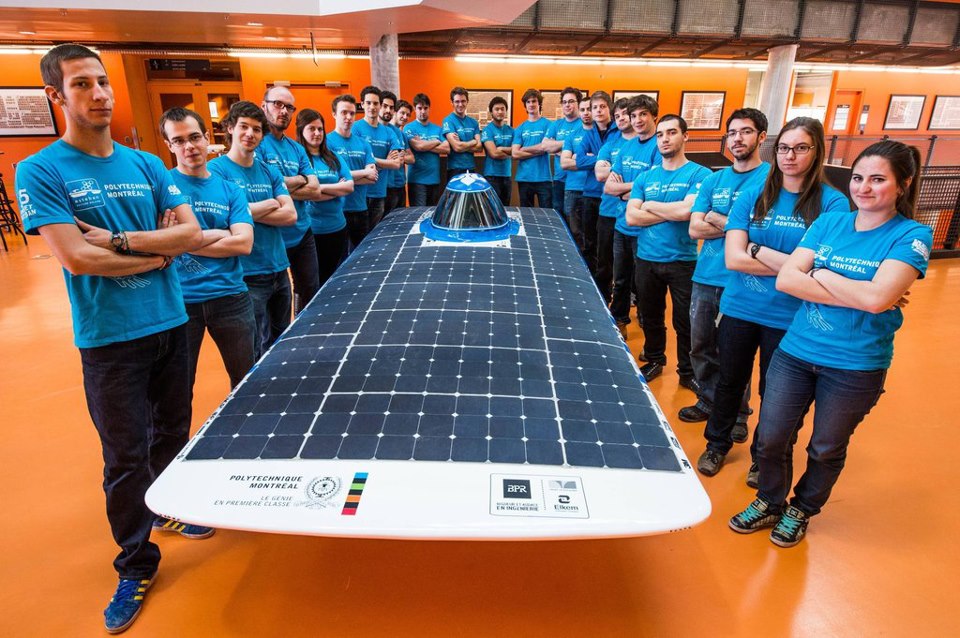 A team of Montreal students is building a solar-powered racing car and aiming for first place in two major races next year.

Projet Esteban is a long-term effort to promote solar energy by the École Polytechnique de Montréal, where students have been collaborating on solar-car designs since 1998.

Last year, the student team represented Canada at the Formula Sun Grand Prix in Monticello, New York, as well as the American Solar Challenge, which ran from Rochester, New York, to St. Paul, Minnesota. Esteban ranked ninth among the participating teams, with a total elapsed time of 109:10:21.

You might be surprised at how fast solar-powered cars can go.

These sleek, winglike racers are stripped down to be as light as possible while drawing their power from solar panels. In 2011, a car called Sunswift IVy built by University of New South Wales students smashed a world record with a speed of 88 kilometers per hour.

Built on a carbon fiber frame running on three wheels, the Esteban VII is covered with six square meters of solar panels, potentially producing 1,300 watts of power at 23 percent efficiency.

Continually improved, the Esteban will feature recent changes including two new in-wheel motors at the front of the car instead of the single in-wheel motor in the previous design. It has also been made more lightweight and aerodynamic.

The team at Luminet is very proud that Olivier Aumont-Cabot, who has worked part-time with us, is part of the Esteban project. In 2014, the car will be participating in the World Future Energy Summit in the United Arab Emirates, where it will take part in a 1,500 km desert relay, as well as a return to the American Solar Challenge, which will run from Rochester to St. Paul once again.

We’ll be cheering on the students at École Polytechnique de Montréal as they push the limits of engineering, solar power, and teamwork in these exciting events. Stay tuned for more news!

Agility Restrictions will still be around, heavily affecting small and…

ESSENTIAL MEETING ROOM TOOLS FOR THE HYBRID MEETINGS OF THE FUTURE

As businesses plan when and how employees will return to…

What is the Future of the Phone?

​Yes, phone system usage is not what it was but…